There are times in our life when we are at a loss, in pain mentally, emotionally, physically, or spiritually and our faith seems stretched beyond imaginings. We may feel like we are down on our knees and have lost hope. We may feel like we have exhausted all people and places to ask for help.  It is in these times, when our needs are beyond our human ability to effect a change, that turning to that something greater than ourselves, God/Consciousness/Source/Creator is sometimes a 'last resort'. In Truth, all blessings flow from this Source.

​Dammah admits that she was one of those people that didn't know how to pray and she was embarrassed to admit this.  Most prayers that she had heard felt memorized, devoid of emotion and disconnected, and she struggled internally to find the 'right' words to say. When talking to God about helping her with this, she said she wanted to pray for 'the highest thing possible' and nothing less.  ​Read the two short stories below of how she learned how to pray the instant she connected with her heart.

While Dammah was talking with her friend Jonathan on her front stoop, they heard a crashing sound and someone moaning.  They ran down the steps to the side of the house, where a man had fallen off of an 8' ladder and was laying on his back moaning in pain.  Jonathan immediately approached the man to see how badly he was hurt and not quite knowing how to be most helpful in the moment, Dammah felt guided to stand by the crown of his head. She laid her hands in his energy field and felt prayer was needed immediately. She didn't know what to pray exactly, so she quietly began speaking Light language/tongues and silently prayed what rose up from her heart "God we need you here now." In that moment the man on the ground turned his head and looked at her curiously but didn't say anything.  Eventually, Dammah felt her part was done and Jonathan remained to help the man to his feet.  A week later, the man who had fallen, came and knocked on Dammah's door. When she answered, he said "thank you for praying for me last week, I felt the Presence."  Dammah was stunned to say the least, but knew that God was teaching her that a simple prayer is all it takes to make a difference and that people, regardless of what we think they are sensitive too in the Spiritual realm, probably are attuned to more than we think! 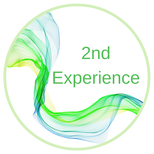 ​After visiting her family in Florida, Dammah was on a plane full of people flying back to North Carolina. She decided she wanted to pray for the safety of the flight and the flight crew. After centering her own heart and quieting her mind, she began to see the plane surrounded by a beautiful bubble of white light.  She felt that her mind was wanting to strain for words to say, so she quieted her thoughts and began feeling love for the fellow airline passengers & crew.  This is when the very simple words came:  "God, I pray that all the people on this plane feel your Presence today. Amen, Amen, Amen & Amen." She stayed with this feeling for a while and when she opened her eyes there was ash falling from above her down upon her lap. Yes, if you are skeptical you might think it was dandruff, she thought so too! But when she looked up she could see that it was falling from above her out of thin air, not from her scalp. She felt heaven's acknowledgment in that moment by showering her with sacred Vibhuti ash, a supernatural and holy symbol of faith that fell from the hands of an Indian Saint, Sri Sathya Sai Baba.

Prayer is Love in Action - Join Us 7a and 7p

We can get stuck in our human need to know everything, to be or say things perfectly. Prayer however, is an expression from the heart not the mind.   It is a surrendering, trusting that God, the Omnipotent Source of all Creation, knows the best way to mitigate someone's suffering and to rekindle hope. Our place as a precant (one who prays) is to extend our faith on behalf of others known and unknown to us.

Please join me in spirit at 7a and 7p any time zone in praying for Love's Presence to be felt by those in need. I have found that by setting an alarm to remind me, it is a practice of stepping outside of my needs to pray for someone else's need that is far greater than mine in the moment.  Pain and suffering is always inconvenient but taking your faith and putting it into service for another is love in action that ripples relief and hope.